Learn About Tuna! The Difference Between the Types of Tuna and the Taste

Home/Learn About Tuna! The Difference Between the Types of Tuna and the Taste

Learn About Tuna! The Difference Between the Types of Tuna and the Taste

Bluefin Tuna is a Luxury Fish 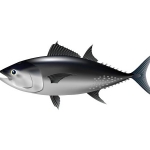 Tuna is best thought of as the only ‘bluefin tuna’.  It’s a representative of a high class of tuna being served in sushi restaurants.  You don’t see them much in the supermarket.  There are many brands of tuna like ‘Oma’s bluefin tuna’.  There is one story that came up in gossip in Japan that at the first auction of the year at the annual Tsukiji fish market auction in 2013 that a representative of a certain chain sushi restaurant won a bid for 155,400,000 yen. (in addition, because of the withdrawal of a Hong Kong company from the high price competition, the auction in 2014 saw a winning bid of 7,360,000 yen.)

Normally, the price does not go that high but natural bluefin tuna is 1 million yen per bluefin tuna so that works out to be 2,000 yen per piece of sashimi.

That Part of the Tuna with the Most Fat (Toro) of  Black Diamond is Exceptional.

Bluefin tuna is massive and some are over 3 m and 400 kg.  The appearance is just so beautiful like a black diamond on a shiny black body and the short pectoral fin for swimming at high speed (the fastest is 100 km/h!) is its key characteristic.  The quality of the meat on this fish is so highly regarded for the high amounts of fat throughout the fish that it’s thought of as the best tasting fish so many Japanese people appreciate its high quality.  There are names for the various parts of a fish depending on the part and the levels of fat such as O-toro (the fattiest part), Chu-toro (reasonably fatty), Toro (fatty), this is another way of enjoying bluefin tuna tasting different parts and it attracts people.

The season for bluefin tuna is definitely in the winter because they swim around and around in the northern hemisphere.  In the other seasons, they lose weight and taste because of spawning.   Those tuna caught in the sea near Japan are distributed as raw fish and traded as luxury fish.  Tuna imported from the Atlantic (imported from the east coast of the US and Canada) and the Mediterranean (imported from Spain, Morocco and Italy) are mainly frozen.  It’s not well known but because of the freezing technology frozen tuna taste can be evaluated higher than raw tuna which is difficult to manage distribution.

These days, you often see ‘farmed bluefin tuna’ in supermarkets.  They are separated out and the price is reasonable too.  Because they don’t swim around in the open ocean like wild tuna, the amount exercise they have is not as much compared to the wild ones, so the taste is not as good.  For that reason, if you see a cheap bluefin tuna in the shops, it could possibly be farmed ones. 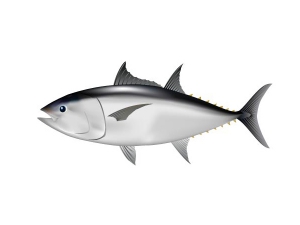 This type of tuna has an excellent sweetness so it is popular for sushi, they look similar to bluefin tuna but they are smaller and the size is only about 2.2 m in length and 160 kg in weight. Its key characteristic is the small yellowfin near their tails. The meat contains rich amounts of iron and because of the red color it’s easy to see the border between the red meat and the fatty part (Toro). The Toro part of the fish is thick and very sweet, plus it’s nice and fatty so it is used as much as bluefin tuna as a premium tuna in sushi shops. You don’t see them in the supermarkets because they aren’t distributed widely. The only bad point is that the color is bright but it does not last so long.

Crisis of Lowered Fish Catches and the Management of the Resources

Southern bluefin tuna is caught in low seawater temperatures in the southern hemisphere in countries like Australia, New Zealand and South Africa. Unfortunately, recent year’s fish catches are decreasing because of the dramatic decrease of fish catches from over fishing. The International organization ‘Commission for the Conservation of Southern Bluefin Tuna (CCSBT)’ introduced a certification system to observe the allowance of the fish catches to each country in 2010. Also, southern bluefin tuna is farmed widely as a business, Port Lincoln in Australia is especially famous for having the best fish landings in the world.

No.1 Consumption in Sashimi 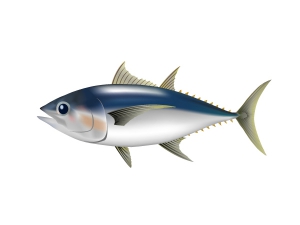 This type of tuna has a lot of distribution in the Kanto region, East Japan and surrounding areas, that delivery sushi, sushi train restaurants and supermarkets have bigeye tuna mostly. The meat has less fat compared to bluefin tuna and southern bluefin tuna so it’s No.3 when it comes to sushi and sashimi. The taste is light, but both red meat and middle-fat is delicious too so there are various dishes that can be enjoyed such as carpaccio, pickles, wood fried and simmered dishes with eyeballs. Bigeye tuna from Sanriku region in coastal Japan is highly appreciated as a sashimi especially in autumn. Also, a lot of imported tuna from Chile, Peru and North America are famous for frozen bigeye tuna and raw ones from Indonesia and Australia are famous too.

Big Eyes and Everywhere in the World to Catch

The appearance of the fish is well known for its big eyes and big head. It is said that because they live in the deep sea their eyes became bigger.

Their pectoral fins are long and the body is around 2 m and 150 kg in weight, they are the same middle sized kind similar to southern bluefin tuna. They are everywhere in the warm waters of the ocean like temperate and tropical areas in the world so the season for them depends on where they are. Compared to other tuna, resources are rich but because the International organization ‘Commission for the Conservation and Management of Highly Migratory Fish Stocks in the Western and Central Pacific Ocean (WCPFC)’ judged in 2014 that bigeye tuna is overfished in the Western and Central Pacific Ocean, restriction enhancements are expected in the near future. 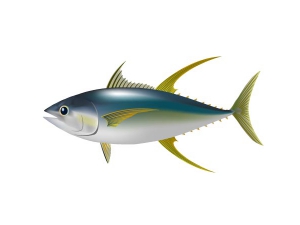 This type of tuna is liked in the Kansai region, West Japan. The meat is a light red color close to pink and the taste is a light with no sharpness. The fat is low so the Toro part cannot be taken out but the meat is firm, so it’s perfect for sashimi or steak. It’s called Ahi in Hawaii, and it’s popular. The season is from spring to summer and this yellowfin tuna caught in Japanese coastal areas has a high reputation as a sashimi too. Also, they are used for tinned tuna products a lot.

No.1 Fish Catches in both Japan and the World

The size is 2m and 170 kg. They are the same sort of middle size as southern bluefin tuna and bigeye tuna. The body shape is relatively smart and literally the color is yellowish. Their dorsal fin and tail fin gets longer when adults. They live in the warmer and shallower sea than bigeye tuna. With a lot of resources, No.1 fish catches both in Japan and the world is this yellowfin tuna. In the coastal area, they are loved for sports fishing too.

5. From tins to Bintoro, Albacore Tuna

Loved Tuna Tin in the World 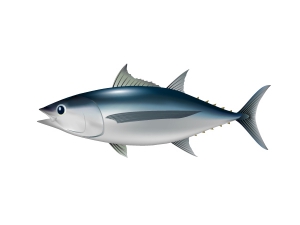 Albacore tuna is often consumed as processed products; it’s a widely famous ingredient for tinned tuna. Pale pink and almost white colored meat has a chicken like texture more than tuna. They are loved in Europe and the US, and there are global demands. The size is 140 cm long and 60 kg in weight; the pectoral fin is significantly long. They widely inhabit the temperate and tropical zones in the world.

These days, ‘Bintoro’ from Albacore tuna is eaten in sushi train restaurants. The pink look and the fatty texture when it’s in season has a reputation for being delicious. Just for your information, this Bintoro is pink but not like the ‘authentic’ bluefin tuna and southern bluefin tuna which look pink because of the marbleness.

Since its establishment in 1960, FUJI-KIZAI has been manufacturing and selling a wide variety of fishing equipment and supplies for longline fishing including aluminum sleeves, swivels, crimping tools, nylon lines. Also, gear and tackle for all kinds of fishing is available.
thiki2017-02-14T22:53:58+09:00