Beyond Your Imagination! Fishing Methods and Longline Fishing for Tuna

Home/Beyond Your Imagination! Fishing Methods and Longline Fishing for Tuna

Beyond Your Imagination! Fishing Methods and Longline Fishing for Tuna 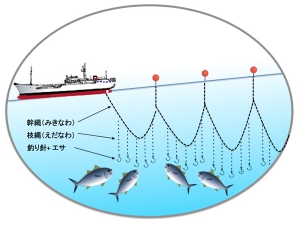 Tuna longline fishing has an especially long tradition that started in Furamura (Tateyama, Chiba in Japan) in the mid 18 century during the Edo era.

Nowadays, tuna longline fishing extends to Asia and a lot of countries in the world from Japan.  With the global tuna sashimi market expanding its demand, the fishing methods used is expanding globally.

The length of main line is from a few 100 m to over 150 km as the longest line, the length between the branch lines (which is between the bait sections on the fishhooks) is approximately 50 m.

Setting the longline hook rig up is called as ‘Tou-Nawa (roping line)’ and pulling them all out is known as ‘Age-Nawa (pulling line).’

Pros and Cons of Longline

Purse seine fishing using a net has a risk of collecting non-targeted fish, but longline fishing collects only the targeted fish.  Purse seine fishing catches fish in an ‘area’, while longline catches fish in ‘a pinned point’.  Basically, because the amount of fish caught is easy to control, it’s said that longline fishing is fishing resources friendly.  However, on the other hand, large birds like albatrosses that eat dead squid floating on the sea could eat the fishing hooks mistakenly or sea turtles could eat the set fish hooks in the water thinking it’s a fish.

Because of those possible harms, the technology and the ideas have been improving to avoid fishing the non-targeted sea animals. 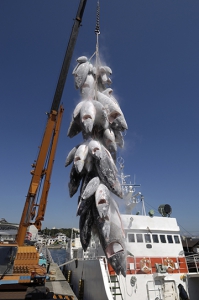 Longline tuna fishing is classified into three parts which are the distant sea because of the size of the ships (more than 120 tons), the coastal sea (from 10 tons up to 120 tons) and the small area (below 10 tons).

In Japan, 70 % of the amount of fish caught by the longline tuna fishing is by the big ships.

This fishing style is on a big ship so the main line for fishing is over 100 to 200 km believe it or not, the number of the branch lines is also huge at approx. over 3,000 ropes.   It’s a long way to come back once departed, the period of voyage is more than one year (average 380 days), and operation days are an average of 250 days a year.  During the time of going to the fishing grounds from Japan, the fishing gear is maintained, once the operation starts it’s usually to call at a port overseas once every three months to resupply with fuel and for the crew to rest. The numbers of crew members are 20 to 25 people.  Due to the small manpower, people of various nationalities have been employed a lot too recently.

Hard Work of Throwing and Pulling Lines and Freezer Technology

One operation set of the faraway longline tuna fishing is to throw lines (put bait on the hook and throw it in the sea) once a day and pull the line (landing fish).  This work goes on for a long time, and it is very hard work both physically and mentally.

The work starts at about four am in the morning.  They attach floats on 100 to 150 km of main line; floats are buoys and also act as landmarks and allow the lines to float.  Also, they set bait on the hooks on approx 3,000 branch lines with the quick skills of the fishermen, baits such as sardine, mackerel scad and squids are used.  This preparation takes about four to five hours to have it done.  This throwing line work is a shift work, so it shifts once every two or three days.

On the other hand, pulling lines work usually incorporates using everyone.  They wait for three to four hours for fish to bite the baits after throwing and pull caught tuna up using winches.  This work takes 10 to 15 hours or occasionally takes the whole day until late at night; it is heavy labor.  After pulling tuna, they measure the length on the ship, cut the gills and tails off, gut it and freeze the fish at minus 60 degrees Celsius.  Then, those fish are kept in the ship freezer (at minus 55 degrees Celsius) for a long time, with the boat docking at the port in Yaizu, Shimizu and Misaki in Japan where they are delivered to consumers after distribution.

After the long voyage and incredible demanding heavy work and because of the development of freezing technology, tuna is delivered to us still fresh and delicious nowadays.

Since its establishment in 1960, FUJI-KIZAI has been manufacturing and selling a wide variety of fishing equipment and supplies for longline fishing including aluminum sleeves, swivels, crimping tools, nylon lines. Also, gear and tackle for all kinds of fishing is available.
thiki2017-02-14T22:54:06+09:00